In my many years in the RC hobby I have been fortunate enough to attend just about every kind of event … from the fast-paced action of off-road racing in Texas to the more relaxed atmosphere of rock crawling in Utah and everything in between. Each event offered something unique to its class. But when Ted Simpson of Dark Soul Racing and Ed Knapp of Team Fast Eddy invited me to attend Dunetoberfest in the desert of Southern California, I had no idea I was in for what I would soon refer to as “the most RC fun I have ever had.” Since I am from the hilly, tree-covered area of central Maryland the dunes of California are a far cry from any landscape I was accustomed to. Not to mention the sun and “dry” heat. So I packed my sunscreen, camera equipment and rattlesnake repellent and headed out west. 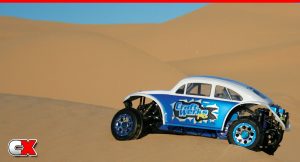 When I arrived at the site I was greeted with row after row of RVs, campers, pickup trucks, tents, dune buggies and off road vehicles of all types. I was in motorsports heaven. After getting settled into the Dark Soul, Fast Eddy camp Ted fired up his Yamaha Rhino to give me a quick tour to get the lay of the land. As we headed around the outside perimeter of this motorhead metropolis I was amazed at the number of large scale RCs that had gathered for the event. The familiar whines and screams of 2-cycle engines filled the air as paddle tires threw 25-foot roosts of sand behind the RC monsters. Could this get any better? Read on … because it does.

This is an event that follows its own set of rules. There is no real organization of activities other than “run-what-ya-brung.” The only two activities that were loosely scheduled were the Poker Run for Saturday and a long jump competition for Sunday as things were winding down. The focus of this event was fun. While several brands of large scale vehicles were present the most prevalent were the 5T and 5B from HPI. You could find them anywhere from box stock to full blown hopped up versions with 60cc engines that were faster than my first full sized car. When these guys were not running their RC vehicles they were out riding the dunes in some type of full-size off-road vehicle. Rhinos, sand rails and 4x4s of all types could be seen tearing up the huge bowls and sand dunes. If I thought my wife wouldn’t divorce me over it, I would add a Yamaha Rhino to my must-have list. On Saturday evening, I took a ride in one, along with several other 4x4s, out to the border fence. The sky is so much bigger when viewed from atop a sand dune. And the stars that could be seen had to number in the millions. A beautiful sight, indeed! 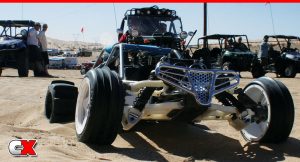 This was intended to be a competition that pitted RC drivers against each other, but with a twist. The object was to drive your Baja or other large scale RC from the passenger seat of a 4×4 vehicle such as the Rhino. The Rhino driver would take you two miles out where you would pick up a flag from a predetermined location and return to the starting point. You had to drive the RC vehicle out and back. It was based on your time. I speak from experience when I say this is a little more difficult than it seems at first. But the rush you can get from driving alongside your Baja going close to 50mph is like no other. The participation was minimal for this first time around. I am guessing it is because many people didn’t really know exactly what was involved. Next year, I predict, could see more entries. Ted Simpson had the winning time with 5 minutes 25 seconds in a Rhino driven by Jim Neiswonger, better known as Frosty. This was almost a full two minutes faster than the next closest time. I tried my hand at it and you can check it out by following the video link at rcdriver.com. 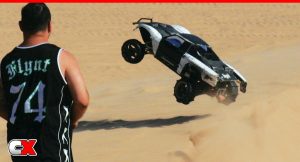 This event was saved for last, and for good reason. The object was pure entertainment for the spectators. Drivers were launching their vehicles out of a bowl shooting for the greatest distance, most back flips or, in some cases it seemed, most damage. Each driver took as many runs as he could, attempting to wow to crowd with high flying theatrics. Air time has long been a favorite for just about every off-road RC enthusiast so this event is always a crowd pleaser.

2010
I hope to attend this event again. I will be sure to ship several vehicles out beforehand and plan on an extra day or two. A special thanks to Dark Soul Racing, Team Fast Eddy for inviting me along. And thanks to Rob Mikula of HPIBajaForums.com for organizing a successful event. 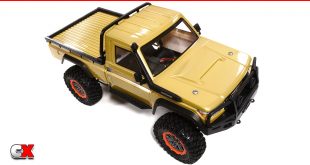 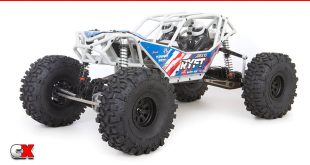 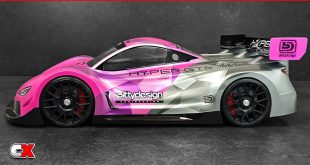 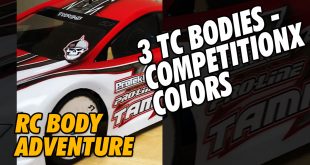 It’s always fun to drop off bodies for paint, especially when you’re getting your signature …