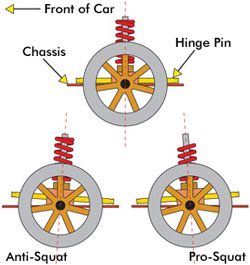 What is Anti-Squat?
Anti-Squat is best described as Caster for the rear wheels…it changes the relation of the inner hinge pins parallel to the ground. The more anti-squat the vehicle has, the less the suspension will squat during acceleration. Anti-Squat is most effective from a stand-still.

Tuning with Anti-Squat
Most vehicles allow the adjustment of Anti-Squat in similar ways: somehow adjusting the height of the front or rear hingepin mounts of the rear suspension arms.

Adding Anti-Squat will make the car Squat less during acceleration. This will cause your car to track straight on straightaways. It will also make your car push coming out of corners, but loose entering corners.

Less Anti-Squat will result in the opposite: a little less forward traction, more stable entering corners, and will track through bumpy sections much better.