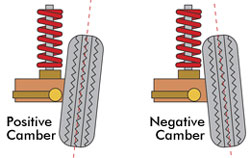 What is Camber?
Camber is the angle of the tops of the wheels from straight up and down. Leaning in is Negative Camber, leaning out is Positive Camber.

As a car turns, the chassis rolls. As the car rolls, this causes the tires to lean over towards the turn, causing less tire to come in contact with the ground (at 0deg Camber). So to compensate, we add a few degrees of negative Camber. When the same car rolls, it rolls up on to the negative Cambered tire, now setting the tire at 0deg, or the largest possible contact patch the tire can have. As we all know, the larger the contact patch, the more the tire is in contact with the ground, and the most possible traction you can have.

Camber is usually adjusted by turnbuckles that pivot the wheel from the lower outer hinge pin. Some cars use what’s called a Pivot Ball Suspension…the steering block is attached to the A-Arm by a Pivot Ball. Screwing the upper Pivot Ball in will add Negative Camber, while unscrewing the same Pivot Ball will remove Camber, setting it closer to 0deg.

Tuning with Camber
Giving one end of the car less Camber gives that end less traction. For instance, if your car is loose (oversteer), you could either add a degree of rear Camber (recommended) or take out a degree of front Camber.

Oddly enough, Camber works a little differently on either end of a touring car. On the front, you should use roughy around -1 to -2deg of Camber. It is rare that you will use more than that. There is a point where you can add TOO much front Camber. If so, steering will decrease as the tires will roll OVER the perfect contact patch area.

On the rear, Camber affects two things. In a straight line, maximum acceleration is achieved with 0 degrees of Camber. Adding Camber reduces forward traction slightly, but you will gain cornering grip. So, there is a fine line on rear Camber. Starting at about -1deg is your best bet, and work from there.

While positive Camber is not normally recommended, I have seen some off-roaders us it. This helps get traction to the INSIDE wheel while cornering. I haven’t used this myself, so I can’t tell you from experience if this is a good thing or a bad thing.

-2deg to -3deg of negative Camber is the norm for most vehicles. 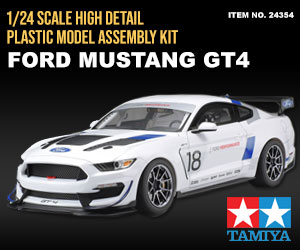 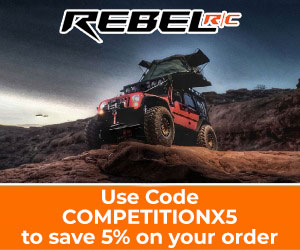 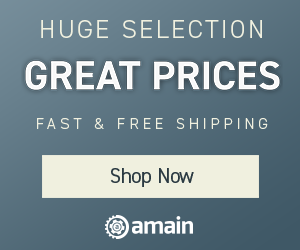