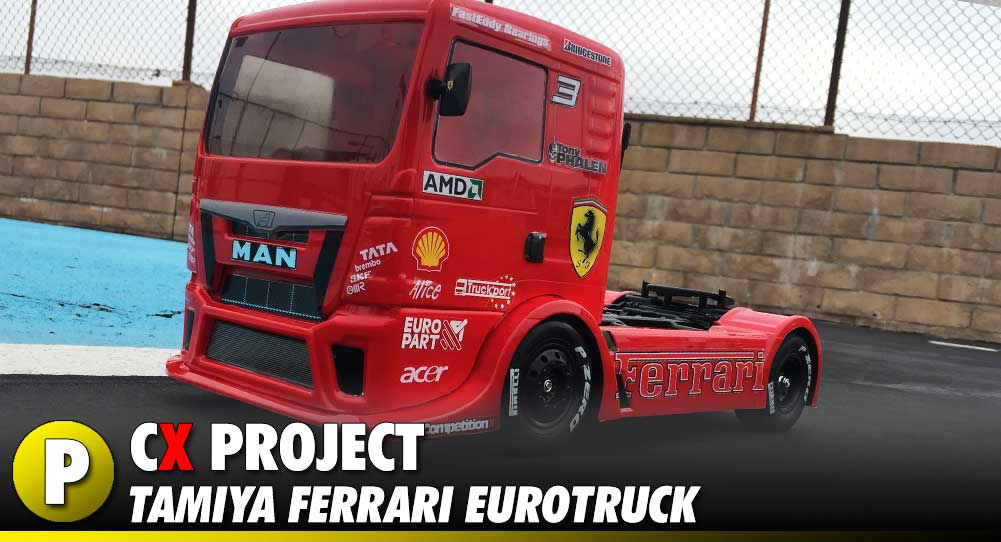 Ferrari’s Entry to the Eurotruck Class

When the Tamiya Team Hahn MAN TGS truck hit the scene a little while ago, I immediately fell in love with the overall look! The multi-piece body, realistic wheels and treaded tires were right on the mark for a crazy-cool looking Eurotruck. Come to find out, Tamiya was looking a little further into the future and wanted to start an actual Eurotruck class, so these trucks started leaping off the shelves based on their $150 price point. Built on the basic TT-01E chassis, they aren’t exactly road-ripping replicas of the real thing, and that’s where this story starts. Follow along as we upgrade the TGS to a more respectable road racer while still keeping it in line with the Tamiya rules. 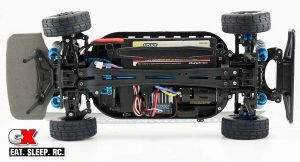 Modifications
Chassis
The Eurotruck series is designed to keep the trucks as simple as possible while still making them as equal as possible. This means the chassis itself has to stay stock, so I didn’t add or remove anything that would violate this rule.

I did upgrade the front and rear shock towers to the TT-01E carbon units. These parts bolt right on, but do require you to change the location of the front body mounts. Since they’re carbon fiber parts, this also gives the Eurotruck a little bit more track cred.

Another tweak I made was using longer screws in the battery mounts. You see, the battery tray is designed for shotgun-tube battery packs, but since most people are using square LiPos, I needed a way to make these packs fit without dremeling the heck out of the battery tray. Dropping a square pack in meant needing taller battery mounts, so the longer screws allowed the mounts to ‘float’ higher so I could attach the battery strap. It’s a bit of a cheater step I guess, but certainly cheaper than going out to buy a bunch of new shotgun-style batteries. 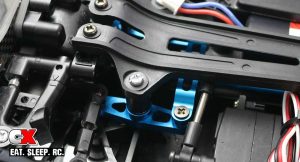 Steering
Other than the bushings, the stock steering system is actually quite good. Instead of just dropping in a set of bearings and calling it a day, I replaced the whole setup with Tamiya’s Aluminum Steering Set. Not only does this include the aluminum bellcranks and bearings, it also adds threaded rods to adjust front toe. To complete the steering setup, I bolted on Tamiya’s Aluminum Steering Link. 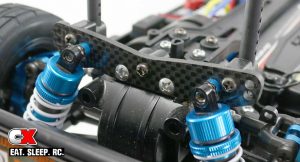 Suspension
The suspension on the stock truck is in serious need of upgrade parts not just for tuning, but to actually help make the truck perform. I added Tamiya’s adjustable upper arm set to the front and rear as well as a set of their beautiful blue aluminum rear uprights. These parts add a little bit of adjustment to help tune the car to varying track conditions.

The biggest and, in my opinion, best upgrade was the addition of a quality set of aluminum shocks. I chose Tamiya’s TRF Damper Set, easily one of the smoothest sets of shocks on the market. I filled them with 37.5wt oil, used the included springs and mounted them to the new carbon fiber towers. Boy what a huge difference these parts made. 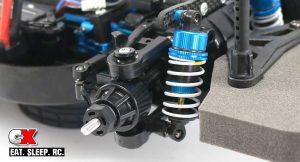 Drivetrain
The drivetrain on this truck got quite a few upgrades as well. For starters, I pulled both of the grease-filled gear differentials out and replaced them with Tamiya’s Ball Diff Set. Both are huge upgrades on this truck and will allow you to tune them for ultimate performance. I set the front one a bit tighter than the rear which really helps the truck yank itself out of tight corners.

Next up was to remove the plastic driveshaft and input shafts and replace them with Tamiya’s Aluminum Propeller Shaft and Joint Set. Tamiya’s Universal Drive Shafts were built and installed on all four corner of the truck as well.

The biggest upgrade in the drivetrain, though, was to remove all of the Oilite bearing and plastic bushings and replace them with a full set of bearing – Fast Eddy bearings to be exact. This set of premium bearings massively increases the speed and free-rolling ability of the drivetrain. In my opinion, this is the best upgrade you can do to any vehicle, especially the TT-01E. 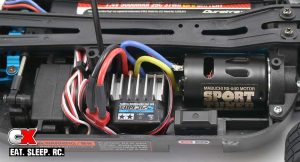 Electronics
The kit comes with a Mabuchi 540 motor and TBLE-02S ESC, so all that is really needed is a servo, battery and radio gear. I went with Futaba’s S9551 shorty servo for the steering. I chose this servo for a number of reasons; it’s a nice upgrade over a standard servo (priced at around $85), it has good numbers for what I’m using it for (122oz of torque and a speed of .11) and it’s a shorty-class servo so I have a little extra room on the chassis for the receiver.

The Eurotruck rules state that the stock Mabuchi motor must be used, but as you can see I upgraded to the slightly hotter Tamiya 23T RS540 Sport Tuned Brushed Motor. This is really more for the article than the Eurotruck series itself; I wanted to give this Ferrari big-rigger a bit more power to see how it would handle it.

Since I had one lying around with the correct connector, my battery of choice was a Duratrax 7.4v 5000mAh LiPo Battery. This pack will have plenty of power to motivate my Mabuchi motor – heck, I could probably run both qualifiers and the main on a single charge. The only issue is that it doesn’t fit perfectly in the battery box, but I explained my fix a little earlier in the article.

Radio gear. Yes, I loaded the Ferrari with my Futaba 4PX. This is a major overkill for this truck as any budget radio system will do, but since I have all my race cars programmed into the 4PX’s 40-model memory, it just makes it easier to cycle through to the right car instead of carrying around multiple radios. 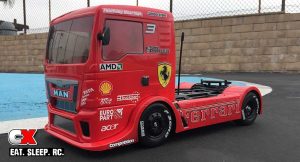 Body, Wheels and Tires
The body that came with the Team Reinert Racing rig is clear, so this allowed me to come up with a cool paint scheme for it. I did some research online for something unique but nothing really caught my eye. As I poked through my massive box of sticker sheets, I came across a large Ferrari sticker set – these look like they might actually fit the truck! Two cans of paint later (red and black) and some minor detailing and I had myself a Ferrari Eurotruck, or what I think one would look like if Ferrari entered the class! Tamiya has also recently released it’s Eurotruck wheels in black, so I mounted the stock tires up on a set of these and added some wheel stickers. Pretty sexy, right?

The Drive
In stock form, the MAN TGS is a bit, ummm, interesting to drive. The stock shocks combined with the limited up-travel in the front suspension and the floppy cab really cause the TT01E to bounce around alot when cornering. I haven’t really found an easy fix for this yet…

That is, of course, until I bolted on some hot performance parts! My Ferrari Eurotruck has been transformed from a bouncy mess to a very stable handling machine. Not only has speed been increased on the straights, but the addition of an actual working suspension makes it smooth in the corners as well. The tires are still a limiting factor, but once you figure out how to manage them the truck really becomes a lot of fun to drive.

Final Thoughts
The TT01E is a great starter platform – it’s inexpensive to buy and easy to build – but once you start getting competitive you’re going to outgrow it real quick. Thank goodness Tamiya (and actually other aftermarket companies as well) support this chassis with quite a few upgrades to really boost its performance. I really enjoy driving the updated version – Ferrari would be proud to call this one of their own! 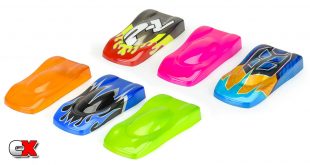 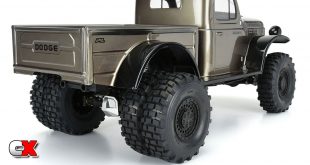 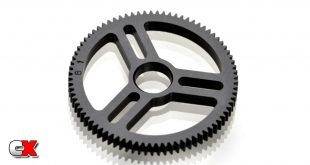 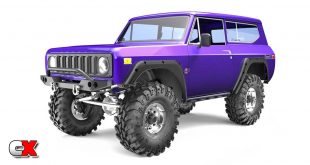 Redcat Racing has announced a V2 version of their popular GEN8 Scale RTR Crawler! The …