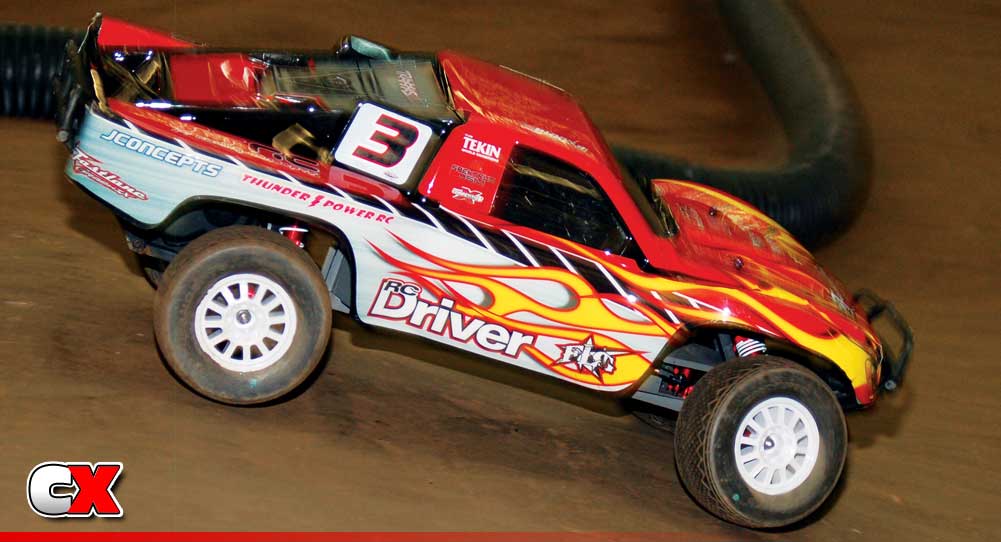 Giving Your Slash A Second Chance

Anyone who has driven a Traxxas Slash knows that this truck is an extremely capable Short Course contender. It has proven itself time and time again against the other great SC players both in the fields and on the track. What’s a bit strange with this whole story is that the Slash, in comparison to the other Short Course trucks on the market, has a totally different design. With a high CG (Center of Gravity), vertically mounted steering servo and only a few tuning adjustments available, you’d think this was more of a ‘fun’ truck than a race truck. Well one company is about to change all of that. Introducing STRC’s Slash LCG Conversion Kit. This conversion utilizes a stock Traxxas Rustler chassis (and a few other components) to create a low-CG, trim racing rig! Not only did I get a chance to do a side-by-side comparison on a sample kit, I got to build my own with top-of-the-line components to really see how my Slash will fare.

Baseline Setup
Initial testing was with a bone-stock Traxxas Slash. Steve Wang, the owner of STRC, met me over at OCRC Raceway in Huntington Beach, California. The track that day, thankfully, was set up with a long straight, a ‘wagon-wheel’ corner, a fast sweeper at one end and a few 180-degree turns. This should really help test all of the different track scenarios one might encounter.

Test Run – Stock Slash
As mentioned before, the first 3 runs were with a bone-stock Slash. The first run was a track-feeler-outer … basically to get used to the track. Run #2 was to push the truck as hard as I could. By run #3 I should have the track layout down and we could get some solid lap times. The truck felt like a normal Slash; good steering, decent rear traction, jumped well and managed the wagon-wheel without much fuss. The only real downside to a stock Slash is the trucks ability to change directions quickly. It has so much body-roll that it takes some time for it to recover. Not a big deal as this makes the Slash easy to drive, but I like a vehicle that can carve its way around a track, not feel like a bag of mush. 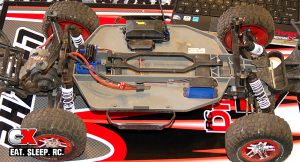 Installation – STRC Slash LCG Conversion
After the 3rd run, I brought the truck back to the pits and Steve proceeded to install the STRC Slash LCG Conversion Kit. You basically have to remove the front and rear ends from the stock Slash and mount them on the Rustler chassis (with the STRC LCG Conversion pieces). It’s a simple install and took Steve about 15 minutes to complete (Editor’s Note: It took me about 30 minutes to install the LCG Conversion, but I was taking my time and replacing the stock electronics). We installed a fresh battery (same kind as what we used for the initial test), mounted the same body, kept the exact same setup (including the tires) and went back out on the track.

Test Run – STRC Slash LCG Conversion
Since I was already familiar with the track layout, I took the first 3-4 laps to get used to how different the STRC Slash felt. It really was a whole new truck. The body roll was almost completely gone. It felt lighter and, since it cornered so much faster now, actually felt like it had more speed on the straight. This extra speed had me checking up before hitting the jumps to make sure I down-sided the landing…and it only got faster on runs two and three! 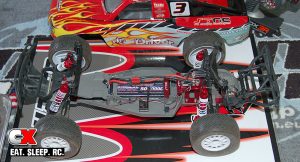 Result – Stock vs. STRC LCG Conversion
I’m sure I could tell you it was faster and you would believe me (you would, right?). But sometimes it takes hard data to convince someone, so I’ll go ahead and give you the lap times we secured during the test. We had our trusty AMB transponder mounted in the truck and let OCRC’s lap timer record the data. While it was a practice day and there was some other cars on the track, both the stock and STRC Slash had the same traffic to deal with.

The Stock Slash was hitting mid-25 second laps pretty consistently with a fast lap of 24.9. The killer section that was the most difficult was the hairpin at the end of the straight. I had to start braking early or else the stock Slash would ‘dump-over’ and traction roll.

After installation of the STRC LCG Conversion, lap times dropped to high 24’s/low 25’s with a fast lap of 24.6. That’s almost a ½ second a lap, and with no additional tuning! That hairpin at the end of the straight … well, no more braking. Just lift and pitch! It would slide right in (controllably, of course) and I could power out if it. With some tuning, I’m pretty confident that the STRC Slash could dip down into the low 24-second laps (maybe even 23’s)!

Steve and I gathered the race results from the previous race and checked out the winner of the Stock Short Course race. Fast lap posted was a 24.6 (same as what I ran). I’m pretty sure, too, that his traffic was being notified that the leader was approaching, meaning he had a pretty clean track the whole race.

STRC Slash – Stage 2
So, what would happen if you took this STRC LCG conversion, built it up with a set of race tires, race electronics and a good brushless system? Could this be the ultimate SC Truck? 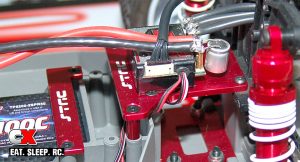 Electronics
I decided to step it up and strap in some high-end equipment. A Spektrum S6040 Servo replaced the stock Traxxas unit. This servo is rated 167oz of torque, plenty for use with the Slash. To power the Slash, a Tekin RS ESC with 17.5 Redline motor were installed. A Thunder Power 5200mAh 50C LiPo fits snugly into the center channel and has more than enough juice to send the Slash rocketing around the track. Finally, a Spektrum DX3R was installed to handle the controls. 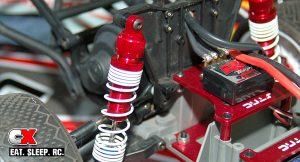 Chassis & Suspension
I kept the stock Slash suspension for the project, but added a few go-fast goodies from STRC to help strengthen the truck. Up front, STRC’s Aluminum Steering Bell Cranks, Aluminum Steering Knuckles and Aluminum Caster Blocks were bolted on. In the rear, STRC’s Aluminum Hub Carrier were installed. For some added bling (and because they’re threaded) STRC’s aluminum shock bodies were added were used.

Drivetrain
The stock drivetrain was retained, however I did fill and seal the differential with 50,000wt diff oil. This is a must with the Traxxas Slash. It helps prevent the truck from ‘diffing-out’ when coming out of the corners. This is a major handling advantage!

Body, Wheels & Tires
To keep things simple, I’ve decided to run a stock Slash body with a wrap from Fastlane Graphix. FLG makes some simply sick wraps for your car or truck and makes painting the body a thing of the past. For traction, I mounted up a set of JConcepts Barcodes on their Rulux wheels. The Rulux wheel is light and super-rigid, letting the tire do all the work. The Barcodes, well, they are the tire to run at OCRC! 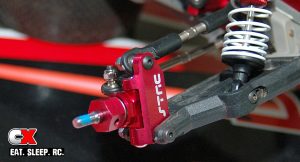 The Drive
Arriving at OCRC to test the Racer Slash LCG, I found that they had just put in a new layout. This is good because I would able to test the Slash on a new track, bad because I wouldn’t be able to compare lap times with the previous builds. I can say, however, that the addition of more power, tuned suspension and a grippy set of rollers made a WORLD of difference to the Slash. While its performance was easily on par with the best-of-the-best SC trucks on the market, it’s was super consistent and easy to drive. A little more track time and I think the STRC Slash LCG will be taking down some of the big boys at the track! 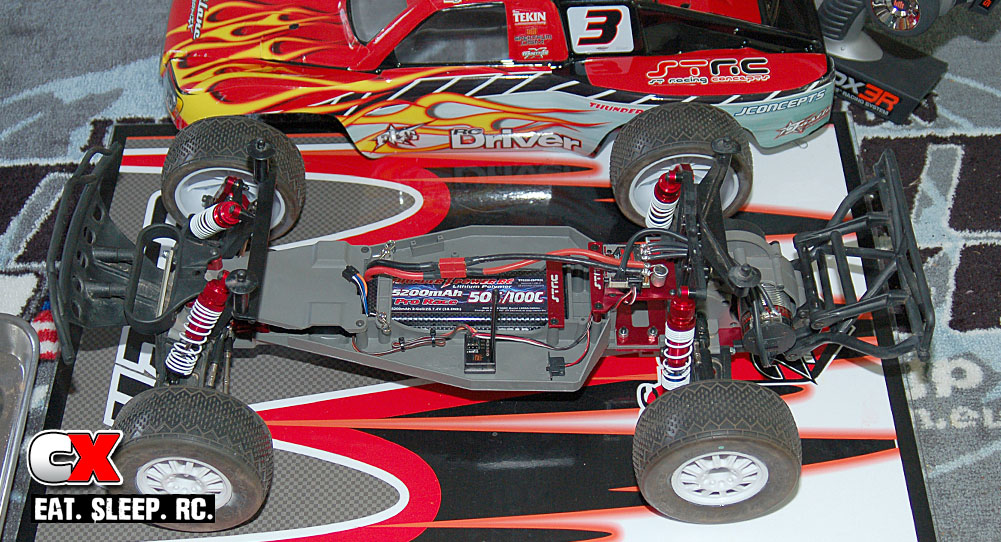 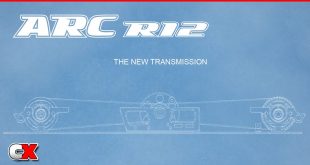 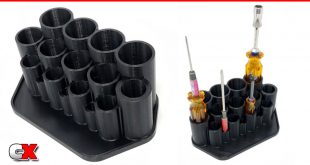 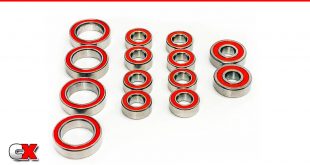 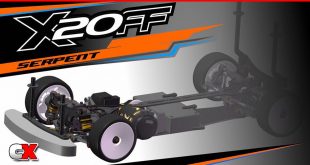