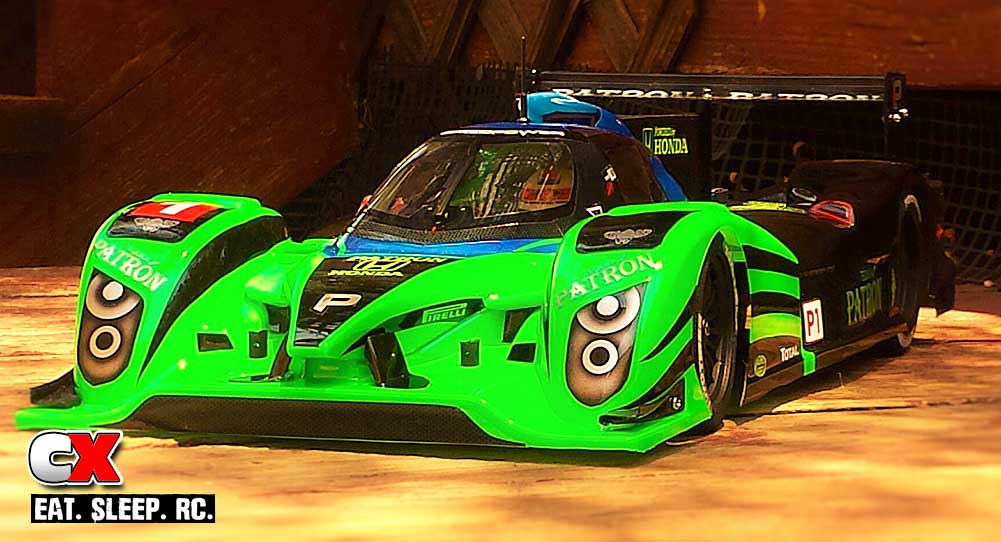 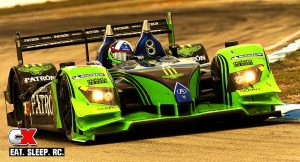 Why build a pan car since the introduction of Speed Passion’s LM-1 back in 2014 never took off in the USA? My ongoing obsession with the 24 Hours of LeMans could be a valued answer. Truth be told, after flipping through an old 2014 November issue of RC Driver magazine, I noticed the cover shot of Tony Phalen’s beautiful Speed Passion LM-1 LeMans Gulf Porsche Pan Car titled ‘The Next Big Thing’. It was a well constructed, 5-page in-depth review of Speed Passion’s new LM-1 pan car. Tony should also be credited for posting an in-depth online build series of the car that can be found online at http://www.competitionx.com/rc-blog-builds/speed-passion-lm-1-lemans-build/ 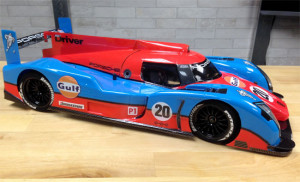 My first attempt failed when I tried to bribe Tony Phalen to sell me his beautiful LM-1 in an email correspondence. This was the easy way out and I figured going forward I was going to build the Speed Passion Kit anyways, but I thought before starting Project Patron P-1 I would toss up a hail Mary pass Tony’s way and see what happens. I ended up in his email spam folder as suspected but luckily Tony recovered the email and contacted me back respectfully declining to let his Speed Passion LM-1 out of his collection. It was worth a try – I was never any good in football anyways. 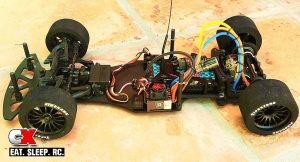 Chassis & Electronics
Imitation is the highest form of flattery and coming up with a livery for the Speed Passion LM-P Patron P-1 wasn’t difficult. The Tequila Patron P2 class entry car sporting a three tone vibrant blue open cockpit with the traditional Tequila lime green and black would be the replica for my vehicle. The chassis build is very straight forward following the steps included in the kit. With the assistance of online builds today on the web this works really well for visual folks like myself when cross referencing a certain step in the build process. The power source and electronics on this build follow all the rules of the spec class requirements for the LM-1 class. I decided on the Speed Passion MMM 17.5R brushless motor with matching Silver Bullet SP Reventon S electronic speed control. The Touring Car-style center shock handles the damping efforts and looks fantastic coated in the gunmetal grey. The Speed Passion 7.4v Shorty LiPo battery tucks nicely in place and enhances the overall look for a simple design Pan Car. For the servo, I went with a high voltage, low profile Solar D770 to turn the dual-bellcrank steering rack while allowing the freedom to run larger style LiPo batteries. Finishing the electronics is a HPI RF-40 2.4GHz receiver to match the TF-40 transmitter. Previous reports of interference difficulty when mounting the motor plugs went without a hitch. If you’re building one of these for the track or a lasting shelf queen a simple tip would be to plug the ESC motor plugs in first then install the brushless motor. The extra slack in the wires from the Reventon S ESC made for a free, non-binding rear pod suspension ride, however after a second thought, the over-the-rainbow wires will be replaced with some shorter, 16g black wire to keep the stealth look when the body is off the car.

Wheels & Tires
The stock wheels that come supplied in the kit are silver in color and mounted with foam tires. This can make or break the overall look of a LeMans-style Prototype P-1 car. I have experienced excellent results with a Dupli-Color vinyl and fabric matte black specialty coating on other projects, so I went with this on these wheels as well. This product allows the end user to skip the primer process and the results are a much higher quality and better overall appearance than the stock silver. Detailed masking around the foam tires and several even coats in one afternoon will get the job done. The addition of some tire decals top and bottom was in order – once applied you’re ready to roll out of the paddock. 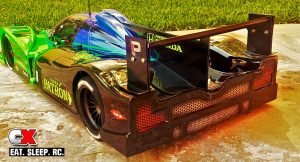 LM-P Body
It was on purpose that I saved this segment for last. I’ve been in the RC hobby for almost 3 decades and this body has sent shock waves through the industry when it first released. The Lexan isn’t the strongest in some areas from a racers perspective but there is no denying this body demands attention which drew me into the Patron P-1 Project in the first place. The LM-P differs slightly from the LM-1 body supplied by Speed Passion; a sharper designed nose cone, lower center of gravity cockpit, air intake induction system and multi-rear winglets that mount from above. Both bodies from Speed Passion are beautifully designed and come with several pieces that require assembly after the paint process. If I had a clue going in how labor-intensive this part of the project was going to be I would of tossed the football back in Mr. Phalen’s direction in a desperate attempt to get my hands on his LM-1 again. All joking aside, there is a saying in France where the 24 Hours of LeMans is held every year; “Pas de sacrifice, pas de victoire” – “No sacrifice, no victory”. 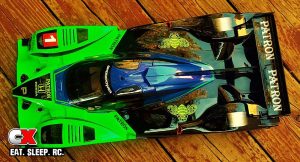 The visual design process came from a simple photograph of a 1:1 scale P-2 race car and applying that concept to a 1:10 scale Lexan body. The front of the car takes on multiple personalities and sometimes resembles the look of pray mantis on steroids. The careful air strokes of the headlights take on a whole new dimension when under attack from direct sunlight. Since this is a 24 Hours of LeMans race car, the kit comes with front and rear light buckets if the builder wants a full race replica that can include lights for night driving. A second set of color-matching headlight buckets can be installed, however I’m currently struggling with removing the beautiful airbrush headlights from the front to complete this setup. Moving to the rear of the car, you can see that everything has been air brushed to resemble the P-2 Prototype 1:1 race car. Not one decal has been applied to the rear – it’s all paint! As much as I would like to stand on the podium and take a bow for this work, the Borg-Warner Trophy goes to Jack Leighan, owner and racer at Sick Graphics. The body arrived un-assembled, un-trimmed and in 16 separate pieces. Excellent painters like Jack get all the glory and the assembly line workers (yours truly) get to put everything together. I should have been a painter! After some very careful scribing and the use of my handy circle cutter on the wheel wells, it was time for final assembly and decals. This was one body I did not want to screw up. The Patron livery was designed by F1 RC Lab and strategically applied using a steady hand and many deep breaths in between. When laying down the canopy’s Speed Power decals (which come in eight (8) separate pieces), proper placement was mandatory to retain the beautiful lime green 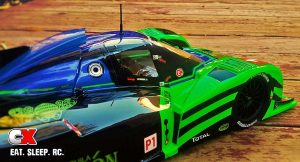 sweep line in the paint surrounding the cockpit area. After successful installation of the canopy decals, I went back to carefully scribe out the window film resulting in an open view of the cockpit. The kid in me screams driver cockpit, however a Tamiya cockpit belongs in a Tamiya vehicle, not a Speed Passion Pan Car. I resourced a HPI driver and cockpit from an older discontinued model that would compliment the race number backer, rear air inlets and canopy door latches. To finish off the LeMans-style powered-by-Honda replica, a high speed weather wiper and telemetry antenna were added for scale realism.

With Project P-1 Patron in the books, it’s time to hit the carpet or tarmac and enjoy what this car was designed to do. I’m hoping this driver-behind-the-keyboard can keep the Tequila Patron P-1 Speed Passion off the barriers on its maiden voyage, If not and things don’t go well, a second thought has the primary sponsor on the side of the car (ie, Patron) chilling in the freezer upon my return to ease the pain in case of total destruction.

Note: I’d like to thank Don for contacting me and staying with his plan to build one of these awesome cars. His Patron-labled P-1 is absolutely sick-looking, and I’m glad I had a chance to talk to him about it. Well done, Don, and thanks for taking the time to write up a great article! 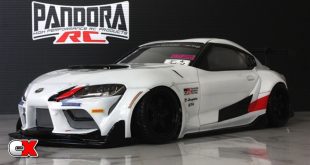 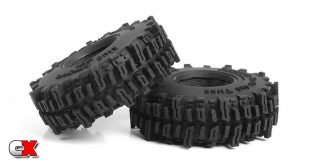 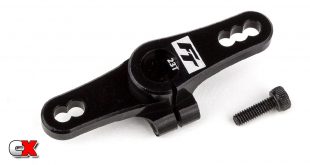 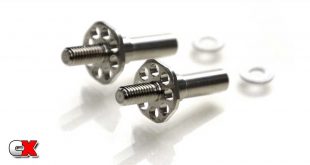 Exotek has posted some new carbon, aluminum and titanium parts for the Team Associated DR10 …