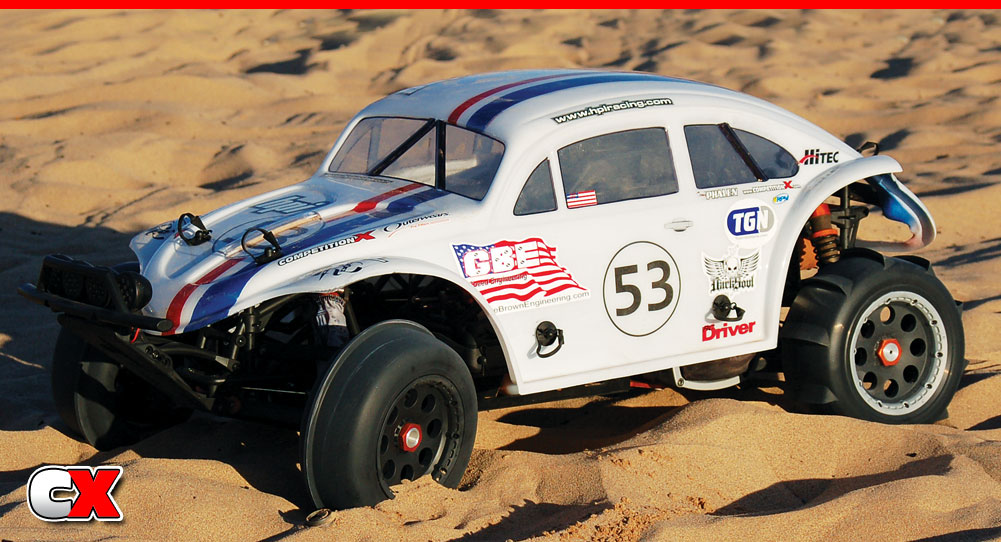 One of the biggest Baja events of the year, Dunetoberfest 2009, was once again held at the beautiful Buttercup Recreation Area at Imperial Sand Dunes, California. Having never experienced this type of event (but absolutely loving the Baja 5B and 5T), I requested this assignment to go check it out. Equipped with my trusty digital camera and a crazy-custom Baja 5T, I headed out there with my girlfriend and my new puppy to join in on what everyone calls one of the must-attend Baja events of the year.

I arrived in Buttercup to find close to 100 motor homes and toy haulers already set up. There were quite a few large scale supporters in attendance as well, including HPIBaja-Forum.com, Hostile Hobbies, Team FastEddy, DarkSoul Racing, DDM, Team GoNads, KRD, Team Phatdad, Turtle Racing, Scorpion Unlimited, and Gabe Brown Engineering. It was great to see everyone having a good time and experimenting with new technology to advance this segment of the hobby. Saturday evening, everyone in attendance was invited to a BBQ provided by the sponsors of the event. This was the perfect opportunity for the Baja community to exchange war stories and share ideas for new projects.

I witnessed some of the fastest and most beautiful Bajas I have ever seen. These beasts were outfitted with custom painted bodies, sand paddle tires and enough bling to make 50 Cent jealous! It was evident that most of the people there had no problem throwing some extra change at their Bajas! My Baja 5T topped with a Herbie the Love Bug inspired VW body. Of course, my little beetle sounded more like a fire-breathing dragon when I started it up. 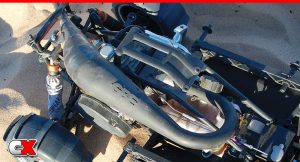 CUTE LITTLE CAR WITH JUNK IN THE TRUNK
My goal for this vehicle was, I’m guessing, pretty much like everyone else’s goal for an event like this; really fast and extremely durable. Being a hardcore racer, I like to run my cars as close to stock as possible but, since this wasn’t going to be a full blown race car, that theory went out the window! On this first round of upgrades, I carefully chose parts that I felt would not only make the 5T more durable, but would add a lot of beauty to my beast. On to the build!

POWERPLANT
I’ve been to the desert. It’s big. Big areas mean lots of speed. Lots of speed equates to a large engine. So, my quest was to find an engine that was out of the ordinary and build the 5T around that. After doing a little snooping around on the Internet (isn’t the Internet great!), I found a little company called KRD. They just happened to be finalizing a new 62cc engine conversion for the HPI Baja vehicles. Based on a Zenoah block, these enormous powerplants actually originated in the GoPed community and, thanks to some crafty engineering work, they drop right into the Baja vehicles. A Gabe Brown Engineering (GBE) air filter was fitted to the carb and is covered in an Outerwears air filter cover. Outerwears also sent over a pull-start cover to keep sand out of the internals. On the exhaust end, GBE crafted up a custom tuned-exhaust pipe. Let me tell you, when this thing fires up, people notice! It’s loud and sounds like a ticked off hornet. 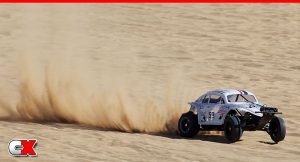 CHASSIS
I decided to stay with the stock chassis tub only because I wasn’t sure how much abuse the 5T was going to take. I figured if I was going to beat my baby up, let’s destroy the stock chassis first before upgrading. I did install a Protecta Parts 5T skid-plate to safeguard the rear end. For bracing, TGN supplied the front chassis A-brace, the fuel tank braces and the side plates. These pieces are a direct fit and are made out of a very tight carbon-fiber weave for strength. For rearend support, HPI supplied one of their gray-anodized 7075 aluminum rear tranny plates from the Baja 2.0. GBE came on board with a shiny aluminum pull-start brace, a rear top plate brace and a gear-side engine brace. Together, all three braces create a solid little pocket for the engine and help to strengthen the rear of the car. I was able to test this out a couple times, and even with the added weight of the engine, everything was still super-solid! 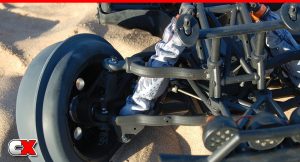 SUSPENSION
Since I hadn’t ever run in sand, I was a little clueless when it came to suspension tuning. I decided that durability would be my first concern, so I added a full set of RPM upper and lower suspension arms. To widen the car and provide a little more stability, GBE sent over a set of their aluminum axle extenders and two of their latest offerings—a rear hub-carrier support plate and rear hub-carrier screw retainers. These parts sandwich the rear hub carrier and provide a much stronger unit by reducing flex. The dampers were given a treatment of DarkSoul shock shafts and rod ends. The aluminum rod ends are threaded onto the shaft and help prevent separation during crashes or over-extension. Both front and rear shocks were wrapped in the Twisted Metal Outerwears Shockwears. For added durability, I installed a TGN carbon fiber front upper pin brace and an HPI HD front aluminum shock tower.

DRIVETRAIN
I knew from racing the Baja how durable its drivetrain really is. Since the 5T already comes with a cast-aluminum gear diff, I left the gearbox alone and focused on the driveshafts. I knew I needed something beyond strong to hold up to the 62cc engine, so I installed a set of the DarkSoul Racing super-thick driveshafts. In addition, I found out they were working on some new gears for the 62cc engine conversion! They added one of their new, lightweight steel 52T spur gears and a 22T pinion gear to the order. These gears were a much better match for the low-end power of the KRD engine, but I think the engine could certainly carry a lot more gear. As you read this, DarkSoul is looking into an even larger set of gears for this conversion.

ELECTRONICS
For the electronics, I wanted some race-level components for their speed and strength. For control, I chose my trusty Airtronics M11x 2.4GHz transmitter. While there aren’t a lot of random frequencies out in the desert, I wanted to make sure I had total control over my expensive investment. And as a bonus, the built-in failsafe ensured that if I lost reception, I wouldn’t be chasing Herbie across the desert (as at least one person at Dunetoberfest had to do this). For steering and throttle, Hitec sent over a pair of servos; an HS-805MG steering servo and an HS-7955TG throttle servo. With 343 oz.-in. of torque and metal gears, the 805MG had no problem steering this 35-pound behemoth around the dunes. I thought the 7955TG (TG stands for “Titanium Gears”) would be overkill for the throttle, but when it came to slowing Herbie down, I’m glad I made this choice. Its 333 oz.-in. of torque gripped the brakes effortlessly without slipping. 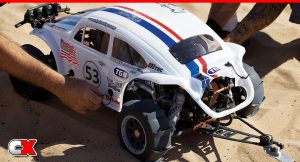 BODY, WHEELS & TIRES
As you can see, I chose the Pro-Line VW Bug body with the Herbie paint scheme. It was quick, easy and allowed a lot of space for stickers. Oh, and it looks cool! For the rollers, HPI sent over a set of their new Sand Buster 5T rib and paddle tires. They’re bigger and provide a little more ground clearance than the Sand Buster 5B tires. The tire carcass is thick! You certainly don’t want your tires shredding when you’re out in the dunes. As a finishing touch, I gave a call over to CC Racing Engines and enquired about converting their on-road wheelie bar to a sand wheelie bar. Two weeks later, the UPS guy dropped off a box containing a wheelie bar and a sick aluminum skid connected to it. Once installed, this thing did a fantastic job of keeping Herbie on all fours under the massive acceleration. 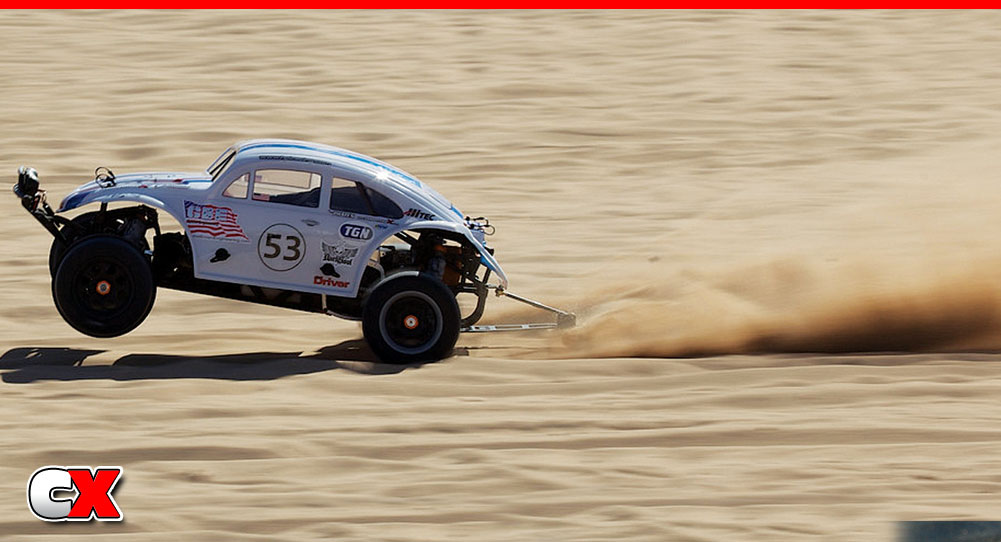 THE DRIVE
Starting the KRD 62cc engine was a test of strength. Its compression is off the charts and initially requires your own personal Popeye to start it. I enlisted Gorilla Gabe Brown to help me get it going. Once we got it started (the video of this is quite entertaining), its deafening sound drew a lot of attention and drivers migrated over for a closer look. After warming it up and giving it a quick tune, we set Herbie down for its first sand run. It was suggested that I take it easy for the first couple of passes, but that went in one ear and out the other; drive it like you stole it, baby! Pulling away from the pits, the combination of stupid power and the HPI paddle tires threw a roost of sand at least 20 feet behind the vehicle. Multiple trips up and down the side of the dunes were no match for the extreme torque of the KRD engine. After a few more passes, we brought Herbie back in for a little love (for you youngsters, Herbie was a Love Bug. Google it.) We decided to remove the wheelie bar and go for some real wheelie fun (say that five times fast). I rolled the 5T back out on the sand and mashed the throttle. Within seconds, Herbie was upside-down. The incredible torque of this engine produced wheelies at any speed. Everyone watching was giggling and hollering for more! After a day of running in the sun and the sand, we brought Herbie in for a final inspection. No parts were broken or bent—a great indication that my choice of upgrades was spot-on.

FINAL THOUGHTS
I had an absolutely fantastic time at this event! Herbie is now my official sand dune-only vehicle and will continue to become more and more ridiculous as time progresses. If you haven’t driven your Baja in the sand dunes yet, you’re really missing out. I don’t bash very much (actually, never), but this is one of the best times you will have with your large scale RC vehicle. For more information on the 2010 Dunetoberfest event, check out Rob Mikula’s Baja Forum at www.HPIBajaForum. com. 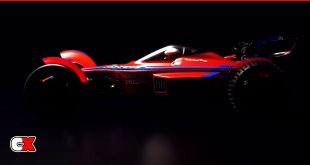 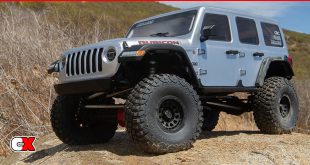 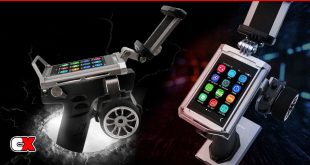 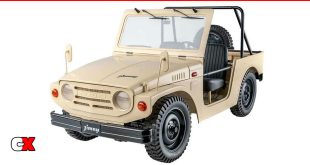 Large-scale trail trucks are starting to show some force recently, with most starting life as …