The 2011 Surf City Classic will be remembered as the race that nitro specialist and Reedy factory driver Ty Tessman showed the competition that he is a force to be reckoned with at the wheel of an electric buggy.

Orange County R/C Raceway (OCRC) in Huntington Beach, California hosted the Classic once again and provided a challenging track for the full field of pro racers and privateers from around the country. Pro drivers were racing against one another in the Invitational classes. The grid would be set by qualifying points earned in four rounds of qualifying. A 10-minute main event would determine the champion. Ty was clearly up to the challenge by taking the pole position in both the 1/8 Electric Buggy and 1/10 4WD Buggy classes against tough competition, which included the current IFMAR World Champion and former ROAR National Champions. Great job!

Both mains played out like qualifying. Tessmann did not disappoint his fans and won both classes in style. The young Canadian collected the handsome awards and big checks from the beautiful trophy girl. But as any real racer will tell you, winning is not about the money or the chicks. The championship title and beating the best drivers in the world is more rewarding. 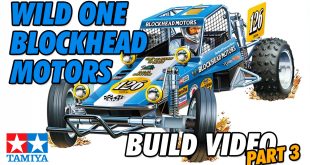